‘Looking for hope’: Newark students anxiously return to classrooms after 18 months away., 09.07.21 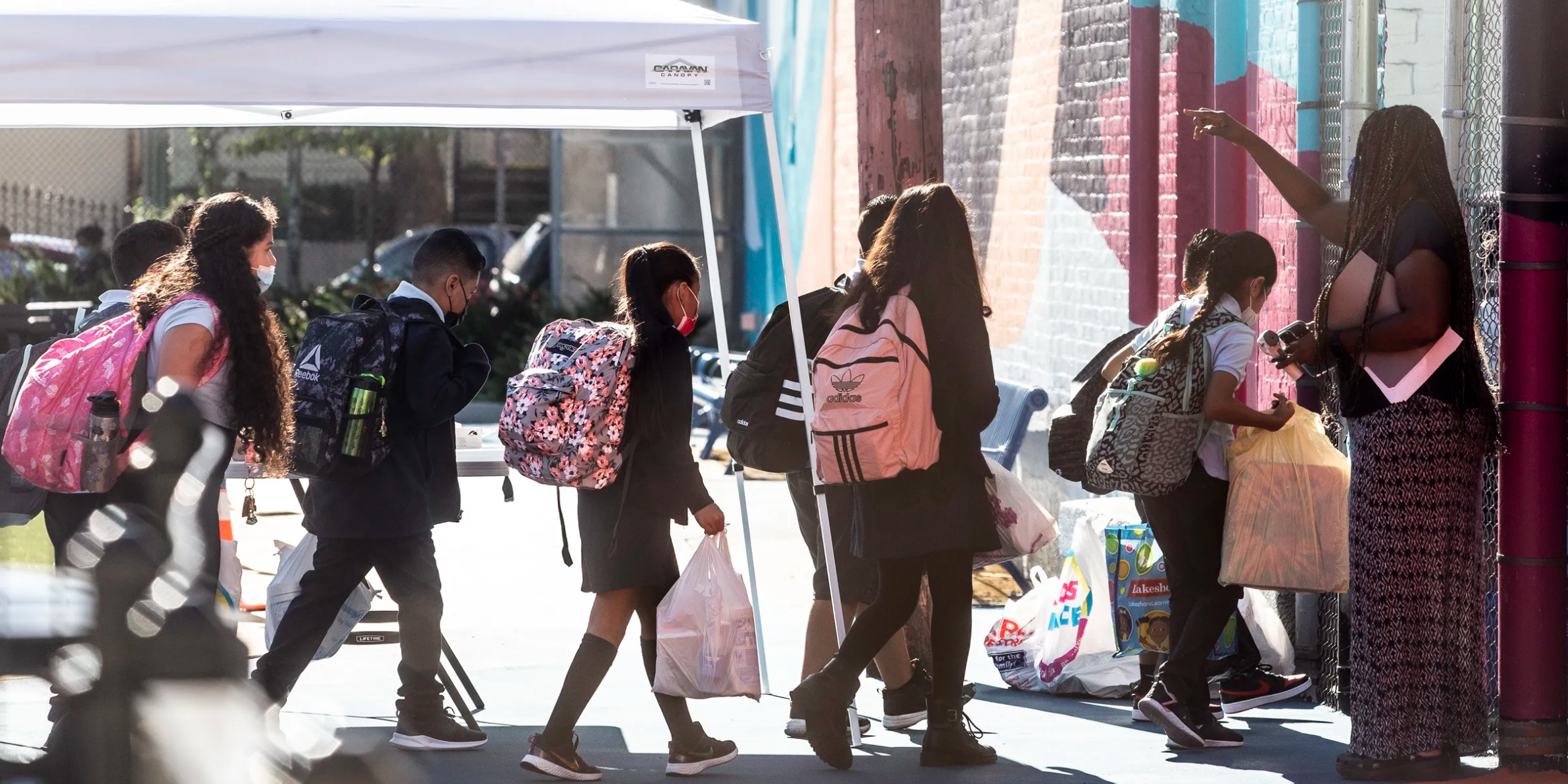 After 18 months of eerie silence, classrooms across Newark echoed once again Tuesday with the sound of students — their jittery excitement only partially muffled by the mandatory masks.

“I don’t mind wearing my mask because I know it stops me from catching the virus,” said Angela Villa, a sixth grader wearing a blue medical mask and speaking in Spanish. She stood outside Lafayette Street School Tuesday morning among a sea of family members and students, who had on blue uniforms and masks decorated with dinosaurs, flowers, and characters from “Frozen.”

The majority of the district’s roughly 37,000 students have not entered classrooms since COVID-19 forced school buildings nationwide to shut down in March 2020. Even when Newark partially reopened classrooms last spring, only about 40% of students showed up. And just 5,500 students, or about 15% of the total, participated in summer programs.

Now, as New Jersey orders a full return to in-person learning this fall, it’s up to districts like Newark to keep students and staffers safe amid the threat of the highly infectious delta variant. With remote learning no longer available, families who refuse to send back their children have few other choices than to homeschool — an option some families across New Jersey, and Newark, said they were considering.

Yet most Newark parents, while anxious about COVID, are eager for their children to return to the structured schedules, academic support, and social interactions that are more likely to be found in physical schools than their virtual versions.

“Hopefully they’ve figured out a way to stay safe while staying in school,” said Gorge Toledo, who accompanied his son, Xavier, to Lafayette Street School on Tuesday. “He needs the interaction with his teachers and classmates after so many months at home in front of the computer.”

Safety was the most pressing concern as Newark’s traditional schools reopened Tuesday, following the city’s charter schools, which enroll about 20,000 students and for the most part started classes last month.

But close behind safety were other urgent priorities: namely, catching up students who struggled mightily during remote learning, and easing students who spent a year and a half at home back into the rules and routines of school. On top of that, the district is opening three new schools and welcoming 350 new teachers this fall, while also revamping services for English learners as required by a settlement with the U.S. Justice Department and dealing with damage from Tropical Storm Ida.

“This is probably going to be the toughest and most important school year that this city has ever experienced,” Mayor Ras Baraka told Newark Public Schools employees at a virtual convocation last week.

As students lined up Tuesday outside Lafayette Street School next to cones marked with their class numbers, some children exchanged hugs and high-fives. One mother pulled down her mask to kiss her daughter’s forehead before leaving the girl to start her first day back.

Newark has been preparing for Tuesday at least since last September, when rising COVID cases convinced the district to scrap its reopening plans and continue with virtual classes.

Since then, the district has used a massive infusion of federal pandemic-relief money to upgrade school ventilation systems, place air purifiers in every classroom, and install sneeze guards on every desk. At the state level, Gov. Phil Murphy has mandated universal masking in schools and ordered school employees to get vaccinated or submit to weekly testing.

After a slow start, Newark has ramped up its campaign to urge students 12 and older to get vaccinated. Yet just 45% of eligible Newark students and 60% of district teachers have gotten the vaccine, schools Superintendent Roger León said last week — rates that trail the state averages for children and adults.

Despite the district’s many precautions, some students and employees will inevitably test positive for COVID. If forced to quarantine, students will continue to learn remotely — a prospect that León has repeatedly told families and educators to expect.

Many students are also returning to school with severe academic gaps after more than a year of remote learning. Just 9% of students in grades 2-8 met state expectations in math based on the results of end-of-year tests taken this spring, according to district data. And over the course of last school year, just 16% percent of district students climbed achievement levels, while a third lost ground.

León has hinted at his academic recovery plans, which include tutoring, new textbooks, and expanded partnerships with colleges and universities — yet families have been given few details.

Before schools can tackle learning loss, however, experts say they must attend to students’ social-emotional needs.

Mental health problems among young people spiked over the past year due to the isolation and tedium of remote learning, the financial instability many families faced during the pandemic, and the anxiety provoked by COVID and pitched national debates about racism. The district plans to boost counseling services and social-emotional learning, which trains students how to recognize and manage their feelings.

Parent Eliane Grabias said the past year had taken a heavy emotional toll on her son, John, who is entering the fourth grade at Lafayette Street School.

“I hope that his teachers comfort the students,” she said, “and understand how they’re walking into that classroom today – with a lot of anxiety about the situation that happened at home, to our families, to us.”

Of course, students were not thinking only of COVID on Tuesday; many of their hopes and worries were age-old.

Xavier Toledo, who arrived at Lafayette Street School half an hour before the doors opened at 8:25 a.m., said he felt nervous about returning to his classroom after 18 months away. But he also was anxious about making friends.

“I’m going into fifth grade and I don’t really know anyone here,” the 10-year-old said. “I don’t want to be the only kid in the playground sitting by himself!”

But soon he saw a familiar face in line. There was one friend, and more were on the way.