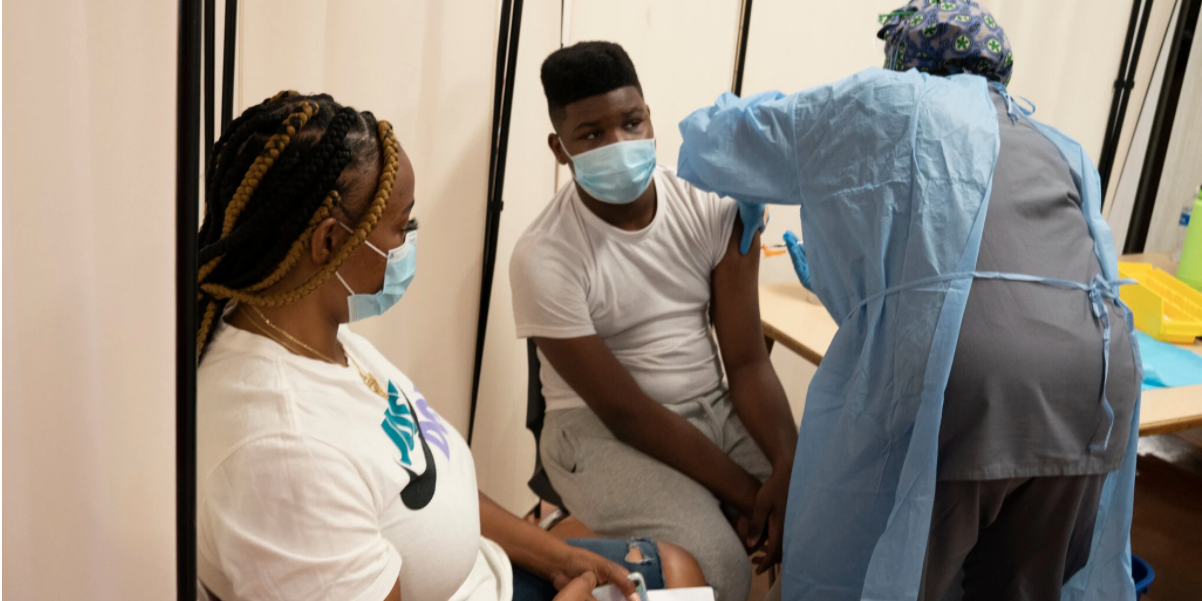 The move was expected to kick off a round of new vaccination mandates from hospitals, schools and private companies.

By Sharon LaFraniere and Noah Weiland

WASHINGTON — The Food and Drug Administration on Monday granted full approval to Pfizer-BioNTech’s coronavirus vaccine for people 16 and older, a decision that is likely to set off a cascade of vaccine requirements by hospitals, colleges and universities, corporations and other organizations.

Within hours, the Pentagon, CVS, the State University of New York system and the New York City school system, among others, announced that they would enforce mandates they had prepared but made contingent on the F.D.A.’s action.

The approval came as the nation’s fight against the pandemic has intensified again, with the highly infectious Delta variant biting deeply into the progress that the country had made over the first half of the year. The Biden administration hopes the development will motivate at least some of the roughly 85 million Americans who are eligible for shots but have so far rejected them to change their minds.

The regulatory move goes a step beyond the emergency use authorization that the agency granted in December. More than 92 million people have already been fully vaccinated since then with Pfizer doses. Some who have rejected the vaccines, expressing fears that they are experimental, have said they wanted to wait until the agency spent more time studying their safety and fully approved them.

In a roughly 10-minute address on the approval, President Biden said it should sweep away any lingering doubts about vaccines and spur more mandates. Appealing to corporate, state and local leaders, he said: “Do what I did last month. Require your employees to get vaccinated or face strict requirements.” In late July, he announced that all federal employees and on-site contractors must be vaccinated against the coronavirus or be required to submit to regular testing and other measures.

Mr. Biden tried to cast the F.D.A. approval as an example of how his administration was making headway against the pandemic, despite overflowing intensive care units in some states and an average of more than 1,000 lives a day lost. He said the death toll, while rising, was still far lower than it was last winter, because more than nine in ten older Americans are now vaccinated.

With the F.D.A. yet to authorize a vaccine even on an emergency basis for children younger than 12, Mr. Biden also tried to reassure anxious parents about the growing number of children who are getting infected with the Delta variant, saying that severe Covid-19 cases in that age group are still “very, very rare.” He also promised to soon address “how we get our kids back to school safely.”

President Biden said the approval should sweep away any lingering doubts about whether the vaccine is safe and effective.

The F.D.A., which has been under pressure to speed up its evaluations of coronavirus vaccines, gave full approval to Pfizer’s just 97 days after the company submitted the last of what regulators said were hundreds of thousands of documents. Officials said they were able to decide the matter in less than half the usual time because regulators worked nights and weekends and added staff members, not because they cut corners.

“This is a pivotal moment for our country in the fight against the pandemic,” Dr. Janet Woodcock, the acting F.D.A. commissioner, told reporters. “The public can be confident that this vaccine meets the F.D.A.’s gold standard for safety, effectiveness, and manufacturing quality that we require for an approved product.”

Some health experts are worried that the approval will unleash a wave of demands from vaccine recipients who want their doctors to prescribe booster doses. The federal government plans to begin rolling out third shots to people who had their second shot eight months earlier, but only after the F.D.A. clears extra doses and not until Sept. 20.

“I think we just have to keep people calm,” said Dr. Jesse L. Goodman, a former chief scientist at the F.D.A. and now a medical professor at Georgetown University. He noted that more than one million Americans had already managed to get extra shots on their own and that demand could be difficult to control.

Ordinarily, final approval could give doctors a certain measure of freedom to prescribe a drug differently than the label advises. Pfizer is also ostensibly now free to market the vaccine, under the brand name Comirnaty.

In this case, though, as both Pfizer and the F.D.A. noted, the federal government controls the distribution of the vaccine in the United States. Dr. Woodcock strongly discouraged people from seeking a third shot until the F.D.A. has ruled on whether extra shots are safe and effective for the general adult population.

She specifically warned against giving the vaccine to children under 12, saying that doing so would be “of great concern” because regulators have not collected enough data yet from clinical trials on safety or the proper dose. Trials are still in progress for that age group, and a regulatory decision about emergency use could be several months away.

“We certainly want to make sure that we get it right in the children ages 5 through 11,” said Dr. Peter Marks, the F.D.A.’s top vaccine regulator, “and then even in younger children after that.”

The vaccine is still authorized for emergency use, instead of fully approved, for children 12 to 15.

Pfizer said it presented the F.D.A. with data from 44,000 clinical trial participants — half of whom got the vaccine, the other half a placebo — in the United States, the European Union, Turkey, South Africa and South America. The F.D.A. said the data showed the vaccine was 91 percent effective in preventing disease. That was a slight drop from the 95 percent efficacy rate in December, when the vaccine was cleared for emergency use. Pfizer said the decrease reflected the fact that researchers had more time to catch people who became sick.

Some public health experts were hopeful that the decision could push some of those hesitant about getting vaccinated off the fence.

Even if only 5 percent more Americans were persuaded to get shots, as some experts have predicted, “that’s still a huge slice of people,” said Dr. Thomas Dobbs, the chief health officer for Mississippi. Like a number of other Southern states, his has been ravaged by the Delta variant. He said licensure would help “shake loose this false assertion that the vaccines are an ‘experimental’ thing.”

A recent poll by the Kaiser Family Foundation, which has been tracking public attitudes during the pandemic, found that three of every 10 unvaccinated people said they would be more likely to get vaccinated with a shot that had been fully approved. But the pollsters and other experts warned that far fewer Americans might actually be swayed by the approval.

“I think that is a vanishingly small number of people in real life” who would change their minds because of the vaccine’s regulatory status, said Alison Buttenheim, an associate professor of nursing at the University of Pennsylvania and an expert on vaccine hesitancy. But if full approval spurs more requirements from employers and other organizations, she said, the results could be more significant.

“We still have a lot of people who just haven’t gotten around to it or don’t have huge objections, but no one’s told them they have to” get vaccinated, she said. “Mandates simplify things for people.”

Already on Monday, the Pentagon announced that the country’s 1.4 million active-duty troops would have to be vaccinated, and Gov. Philip D. Murphy of New Jersey said that all teachers in that state would have to get shots or submit to weekly testing. Chevron and CVS both said they would require some of their employees to receive coronavirus vaccines, and the State University of New York and the University of Minnesota systems announced similar requirements for students.

Wall Street rose, with investors buoyed by the vaccine news. The S&P 500 stock index was up almost 1 percent, and shares of Pfizer climbed 2.5 percent.

“The full regulatory approval of the Pfizer vaccine created hopes that it may spur additional gains in vaccination rates in the U.S., which would be an economic positive going forward,” said John Canavan, the lead analyst at Oxford Economics.

So far, 54 percent of Americans who have been fully inoculated have gotten Pfizer shots. Most of the rest received Moderna’s vaccine, which also requires two doses.

Dr. Marks said that federal health agencies would continue to monitor the Pfizer vaccine’s safety. The F.D.A. will also require Pfizer to continue to study the risk of myocarditis, an inflammation of the heart muscle, and pericarditis, an inflammation of the membrane surrounding the heart, in people who get its shot, including long-term outcomes for those who fall ill after vaccination. The F.D.A. in June attached warnings to the Pfizer and Moderna vaccines noting possible increased risk of both conditions after the second dose.

Less than two months after it appeared to have curbed the spread of the virus, the United States is averaging around 150,000 new cases a day and more than 90,000 hospitalized Covid-19 patients. Exactly two months ago, before the Delta variant fully took hold, federal health experts said the nation would be highly unlikely to again face a death toll of 1,000 or more people a day. The seven-day average as of Sunday was 1,008 daily deaths, according to a New York Times database.

“Full approval could not come at a more important time,” said Dr. Richard Besser, the president of the Robert Wood Johnson Foundation and a former acting director of the Centers for Disease Control and Prevention. He called on schools and businesses to require vaccination before allowing people to congregate indoors.

Image Credit: Saul Martinez for The New York Times. The next major decision looming for the F.D.A. about coronavirus vaccines is whether to authorize booster shots.

Vaccination rates have been rising steadily in recent weeks as fear of the Delta variant has grown. Providers were administering about 837,000 shots a day late last week, and Mr. Biden said the most recent seven-day total was the highest since early July. He said more people in Alabama, Arkansas, Louisiana and Mississippi — some of the states with the highest caseloads — got their first shots in the past month than in the previous two months combined.

Dr. Marks said that myths about the vaccines remain a major impediment to fighting the pandemic, including false claims that shots would cause infertility, would foster rather than prevent Covid-19, and had even led to thousands of deaths.

“Let me be clear: These claims are simply not true,” he said.

The F.D.A. is in the midst of a blizzard of decisions about coronavirus vaccines. The next major one looming is whether to authorize booster shots.

The Biden administration said last week it planned to offer third shots to adults who got the Pfizer and Moderna vaccines, eight months after their second injection, starting Sept. 20. Third shots are already authorized for some people with immune deficiencies, but the risk-benefit calculus is different for the general population.

Federal health officials said that both Pfizer’s and Moderna’s vaccines, which rely on similar technology, wane in potency over time. That trend, they said, is converging with the rise of the particularly dangerous Delta variant, making those who completed their vaccinations at the start of the year increasingly vulnerable to infection.

Some public health experts have challenged the plan for booster shots as premature. They say the available data shows that the vaccines are holding up well against severe disease and hospitalization, including against the Delta variant. Extra shots would be warranted only if the vaccines failed to meet that standard, some have said.

Regulators are still reviewing Moderna’s application for full approval of its vaccine, which it filed in June, a month after Pfizer. That decision could take several weeks. Johnson & Johnson is expected to apply for full approval soon.

When should I get the updated COVID booster shot?
November 15, 2022